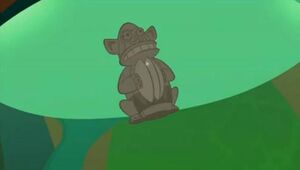 The Tempus Simia, or Time Monkey, is a mystical monkey artifact that could potentially be used to transport a person or object to virtually any point in time.

The Tempus Simia was capable of opening warps in the fabric of time and space, thereby allowing the user to enter and alter the time stream. However, other than the obvious danger of having a negative impact on future events, shattering the Tempus Simia posed an even greater risk. It could either mean the time stream might return relatively to normal, or the unraveling of the fabric of time space, which would bring about the end of the universe.

Monkey Fist devised a plan to unite the two halves of the Tempus Simia. Knowing Team Possible would interfere, he joined forces with Dr. Drakken, Shego, and Duff Killigan. With the idol completed, they traveled back in time in an attempt to first break Kim Possible's spirit in the past, and then to simply destroy her younger self entirely, so that she would never grow up to hand them all humiliating defeats. Thanks to a chrono-manipulater given to her by a future descendant of Rufus, Kim and Ron pursued them through the time stream and were able to stop their attempts. Shego was approached by a future version of herself that had successfully taken over the world with the Tempus Simia, and so betrayed the group and stole the idol. Kim and Ron followed Shego to the distant future she had conquered. Assisted by future versions of their friends and family, Team Possible was able to destroy the Tempus Simia, which fortunately restored the time stream to normal, and therefore the entire adventure technically never happened.

The Supreme One's Tempus Simia
Add a photo to this gallery

Retrieved from "https://kimpossible.fandom.com/wiki/Tempus_Simia?oldid=24360"
Community content is available under CC-BY-SA unless otherwise noted.