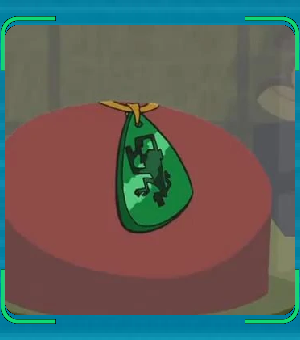 The Amulet of the Monkey King

The Amulet of the Monkey King was an artifact sought by Monkey Fist for its mystical monkey properties.

The amulet accidentally landed around Kim Possible's neck while she prevented Monkey Fist from stealing it. As a result, the amulet bonded with her, and its design appeared on her neck as if it were a tattoo. The following day, she began rapidly developing monkey features, starting with fur on her face, then monkey hands, teeth, and feet, until she had basically become a talking, human-sized monkey. Monkey Fist threatened Kim by stating there was an alternate, "very painful way" to separate her from the amulet so that he could still obtain its power, but Kim escaped before the details could be revealed. Wade was able to undo the transformation just before it could become permanent, separating the amulet from Kim in the process.[1]

The Amulet of the Monkey King on display

The monkey tattoo appears on Kim's neck, after the amulet disappears

Retrieved from "https://kimpossible.fandom.com/wiki/The_Amulet_of_the_Monkey_King?oldid=35328"
Community content is available under CC-BY-SA unless otherwise noted.