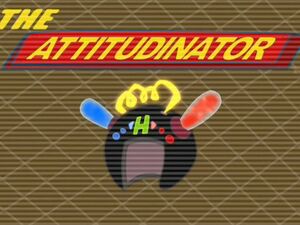 The Attitudinator is a helmet-like device designed by HenchCo Industries. The helmet was invented primarily with making villains more evil in mind, but it can actually make a person good or evil, depending on whether they are good or evil to begin with. The Attitudinator is best known for unleashing Ron Stoppable's evil persona, and returning Dr. Drakken's blue skin to its original color.[1]

The Attitudinator is a helmet that removes the good and bad energy of the wearer, then readjusts the balance according to the desire of the wearer. Though the helmet was originally marketed by HenchCo under the idea of making villains more evil, it was increasingly used to turn heroes into villains during its lifespan.[1]

One of Team Go's foes, Electronique, introduced a new and improved Attitudinator, dubbed the Reverse Polarizer. Her modifications, most notably a blue jumper cabling connecting the good and bad energy containers, greatly improved the helmet's performance. Pressing the "H" logo on the helmet fired an energy beam that caused those hit to toggle between good and evil. As such, wearing the helmet was no longer required, and several people could be targeted at one time.[2] It is unclear if Electronique fully repaired the original Attitudinator, which was visibly damaged and held together by tape when last seen[1], or if she somehow obtained a different unit, as the Reverse Polarizier had no visible damage when introduced.[2]

When Dr. Drakken tests his evil power, he suddenly learns that its evil force is very weak. But when his evil energy is transferred to Ron, Ron became one of most most evil and effective villains in the series. It is not clear how the weak evil energy from Drakken could transform Ron so drastically.

Theory 1: Ron has a very powerful evil side, but it is suppressed by his mightier good side. So, the small portion of evil that he got from Drakken was enough to overturn the balance from good to evil.

Theory 2: The Attitudinator is designed to remove the good side of the wearer, and leave the evil side intact. So when the Attitudinator's stored evil energy from Drakken was absorbed into Ron, and for Drakken vice-versa, it completely removed Ron's good side, leaving his inherent evil side intact, and replaced it with Drakken's evil side, while the opposite was done for Drakken. This may explain why after the transfer Ron turned blue, and Drakken's skin returned to normal. The evil that Ron's evil persona possessed included Drakken's own evil energy, which was tied into his blue skin. Likewise, Drakken's coloring returned to normal because he had both his and Ron's good energy, and therefore lacked evil energy that may have been at least partially responsible for turning him blue originally.

Electronique with the Reverse Polarizer