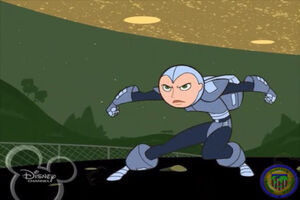 The Centurion Project is a top-secret cybertronic battle armor. It was stolen by Duff Killigan, who attempted to sell it to Dr. Drakken, but ended up bonded to Kim Possible instead.[1]

The Centurion Project's dormant form is that of a pale violet bracelet-like band constructed from a super-strong alloy containing cutting edge nano technology. When activated, the band transforms and gradually covers the person wearing it in battle armor. The circuitry is controlled by a biometric parameter related to stress: the more stressed the person wearing the bracelet becomes, the faster they are covered from head to toe by the armor, and the more aggressive the armor becomes toward perceived threats. According to Wade, the idea was that if a soldier is stressed in battle, the armor kicks in to both protect them and give them additional combat capabilities.

The armor itself is highly durable, and takes no visible damage from handheld explosives or being buried under heavy debris. Furthermore, when it does sustain damage, a self-repairing system activates within seconds. Offensively, the armor wields two shoulder-mounted rapid-fire energy cannons and two wrist-mounted non-lethal energy beams. It also enhances the strength of the wearer and contains a flight-capable rocket pack that deploys from and refolds into the back. In addition, the armor is sentient and its systems are automated, so it continually responds to the wearer's state of mind in battle conditions. This means that no actual knowledge of the Centurion Project's weapons is necessary to wield it effectively.[1]