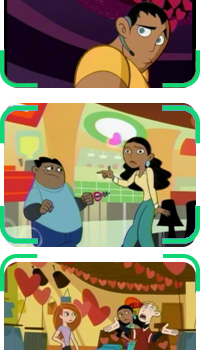 The Cupid Effect
Broadcast Information
US Broadcast Number:
69
Disney Channel US Premiere:
February 10, 2007
Merchandise
iTunes Releases:
Unknown
Valentine's Day is approaching, and Wade meets Monique in person for the first time, instantly developing a crush on her. However, she expresses not being interested in him romantically - largely owing to the age-gap between the two.

Through some accidental inspiration from Ron, Wade invents a "Cupid Ray" to get Monique to crush back. Kim and Monique can both sense something isn't quite right. But things get even more complicated when the Señor Seniors gain posession of Wade's Cupid Ray's plans...

Valentine's Day is imminent, and at Club Banana, Monique complains to Kim about a horrible drive-through date she had. She also reveals her jealously about Kim and Ron probably having something planned for Valentine's Day while she is dateless. However Kim responds that Ron has not remembered Valentine's and as such they have no plans. As if on cue, Ron arrives at Club Banana because Smarty Mart's pet department has been closed for a while due to some animal cages being left open and "food chain issues" occurring.

Kim reminds Ron about Valentine's Day, but Ron says he doesn't celebrate,having never had a girlfriend on Valentine's Day. Then he realizes that he does have a girlfriend this Valentine's day. Wade pops up in person, scaring Ron by tapping him on the shoulder. Wade changes out the batteries on the Kimmunicator, and shows Kim a new X-ray plug-in. Monique greets him for the first time in person and suddenly Wade is in love with her. He becomes awkward and giddy. He wants to ask her out, but Monique does not care for the age difference. Ron decides to help him out, even going so far as to say, "Who's dating Kim Possible?" as evidence of his alleged knack for romance. To which Wade responds that the chances inexplicably worked in Ron's favour.

A failed attempt to woo Monique at the mall follows. Due mainly to Ron trying too hard to make Wade look grown up, resulting in them getting in trouble with mall security as well as mixing up his biology homework with a romantic note he wrote for Wade to read to Monique. After getting in trouble for impersonating a president the two contemplate how complicated romance is. Wade wishes it were as easy as inventing things, and Ron jokingly suggests Wade make some kind of love-ray to make girls instantly fall in love. Wade decides to take this suggestion seriously and begins conceptualizing a "Cupid Ray".

Overnight, Wade develops the new device and builds a prototype. Just after he finishes it, Ron enters with the idea to scoop Monique away to somewhere romantic. Thus, Ron leads the unsuspecting Kim and Monique on a mission to Paris. Ron's excuse is that the Eiffel Tower is in danger. Of rust. Eventually. Fortunately for him, Kim reaches the impression that Ron brought her to Paris for a date, which she finds romantic. And Monique, as an awkward third-wheel.

While Kim pulls Ron away to talk to him about not encouraging Wade, the young genius casually zaps Monique with the device. It works like a charm. Although confused, Kim believes that maybe all Wade and Monique needed was a third chance and a romantic environment and she turns her focus back to Ron for the night.

Unfortunately, Señor Senior Junior and his father are in France for "Le Goop" hair-gel, and see the Cupid Ray in action from inside the store. Amazed at its capabilities and the potential to use it for evil, the two hatch a scheme to steal the schematics from Wade's house while he is away and acquire advanced sound systems in order to amplify the Cupid Ray by roughly a hundred megawatts.

Kim confronts Ron over the way Monique is suddenly fawning over Wade in between trying to actively avoid him, and eventually Ron confesses about the Cupid Ray. Although disappointed in both of Wade for doing it, Ron for not trying to stop it—Kim focuses on the fact that the technology is now in the hands of the Seniors. Fortunately, Wade discovered that Junior is hosting a Free for Ladies Only concert and the team prepares to leave just as Monique arrives to confront Wade over what he had done to her. Needing to move quickly, Kim zaps Monique with the Ray, bringing her along for the mission.

Entering the concert itself proves to be difficult as Monique lacks a grappling hook, which Kim, Ron and Waded all possessed. Kim and Monique decide to dress Wade and Ron up as women. Thus the four are able to walk in the front doors without issue. Aware that the Cupid Ray could effect Kim and Monique, Wade gives them special earplugs to prevent the ray from affecting them.

Junior arrives on stage shortly after and the crowd dislikes his singing - until Senior activates the Cupid Ray. Suddenly all the attending girls go from annoyed disinterest to raving over him like he is the best singer in the world. As the crowd goes wild, Ron gets knocked into Monique and her hearing protection falls out, leaving her again vulnerable to the Cupid Ray, and joining the obsessed crowd. Annoyed, Kim goes after Junior and confronts the confused villain as he does not understand why Kim is immune to the ray. Unfortunately for Kim, Senior is hiding behind her and removes her ear protection before she has a chance to take action - thus she too falls under effect of the amplified Cupid Ray.

Desperate to stop their efforts from unraveling further, Ron goes after Junior personally while Wade goes to find the Cupid Ray. While Ron distracts everyone's attention by confronting Junior for being smothered in Kim's attention, Wade sneaks backstage and removes his feminine disguise. Wade is confronted by Senior, who introduces him to his two minions, "Evil" and "Treachery". Fortunately, Wade evades the two as they attack him by using his grappling belt. He disables the device, turning the Cupid Ray's effects on the concert attendees off and allowing them to run Junior out of the concert building as a mob.

Later at Bueno Nacho, Kim and Ron are having a simple date for Valentine's Day, but their kiss is interrupted by Monique reprimanding Wade over the whole incident. However, Monique expresses happiness with being his friend although she is not interested in a romantic attachment, despite being flattered by his crush. While Monique is still talking, Wade notices a girl his age in the form of Olivia, who is sitting a short distance away. After he moves to introduce himself to her, Monique realized she is still dateless on Valentine's Day. Ned leans over the counter and wiggles his eyebrows suggestively at her - which makes Monique quite content with being single for the moment.

During the end credits Wade explains to Ron that Olivia is also a super genius, and had invented her own Cupid Ray which she has been using on him. Ron momentarily freaks out, worried that Kim also has one somewhere, when she walks up and startles him. Kim refers to Ron as weird for his over-the-top reaction before adding "I like weird".

Monique: Look, Wade. Okay, I know what it's like to crush, I do, but… *zapped by Cupid Ray, squeals* You're so adorable!

(At the end of the episode when Kim meets Ron in the mall)
Kim: Hey, Ron.
Ron and Rufus: Ahhh!
Kim: What are you doing?
Ron: Nothing.
Kim: You're weird.
Ron: Kim…
Kim: Shh… I like weird.

Kim: You do know what happens in February. Don't you, Ron?
Ron: Groundhog Day. Presidents Day. Dental Health Month! Oh, that reminds me! Rufus!
Rufus: (comes out of Ron's pocket with a toothbrush) Ta-da!
Ron: Happy Dental Health month, KP. It has a tongue scraper on the back.
Kim: Ahem, Valentine's Day.
Ron: Oh, uh, I don't celebrate. I mean, yeah, you know, I never had a girlfriend on... (Realizes that Kim is his girlfriend) Holy Canoli! I have a girlfriend on Valentine's Day!

Ron: The notes! Go to the notes!
Wade: Oh, um... (reading) 'The humble earthworm is vital to agriculture. It moves through the soil by excreting lubricating mucus.
Kim and Monique: EW!
Ron: Okay, wait, that's my biology report. But...OH, that means...!
(cut to Mr. Barkin reading Ron's notes in his classroom)
Mr. Barkin: Awww. That's a lovely thought. A+, Stoppable. (wipes away a tear) A+!

Ron: You need to whisk Monique away to the City of Lice!
Wade: You mean Paris? The City of Lights?

Retrieved from "https://kimpossible.fandom.com/wiki/The_Cupid_Effect?oldid=36555"
Community content is available under CC-BY-SA unless otherwise noted.