This article is about the episode. You may be looking for the character. 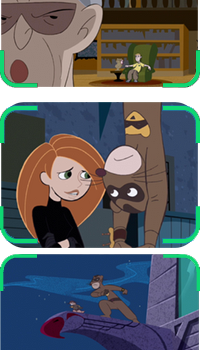 While doing community service hours for school credits, Ron, longing to become more of a hero, finds himself charged with assisting a notoriously difficult and cranky home-bound senior. However, he soon finds out there is more to Timothy North than a bad attitude and a big mansion. Ron finds himself carrying on a legacy of Timothy North's and becoming the Fearless Ferret 2.0 - on the condition that he keeps his identity a secret. The Fearless Ferret's return does not go unnoticed by his old enemy. Meanwhile, Kim knows that something's up and is determined to find out what.

Yellow shirt with blue star, blue pants
Add a photo to this gallery

It's a Spider-Man Moment!

"Way to go, hero!
Add a photo to this gallery

Retrieved from "https://kimpossible.fandom.com/wiki/The_Fearless_Ferret?oldid=36546"
Community content is available under CC-BY-SA unless otherwise noted.