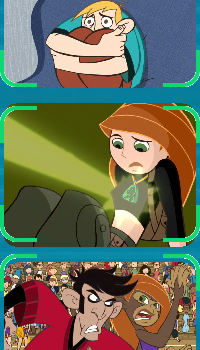 Kim accidentally becomes bonded with The Amulet of the Monkey King and begins transforming into a monkey, but is kidnapped by Monkey Fist who intends to get the amulet back. Meanwhile, Ron finds a monkey he believes to be Kim and looks desperately for a way to change her back, while avoiding the complications Josh Mankey's attention may provide.

Retrieved from "https://kimpossible.fandom.com/wiki/The_Full_Monkey?oldid=35841"
Community content is available under CC-BY-SA unless otherwise noted.