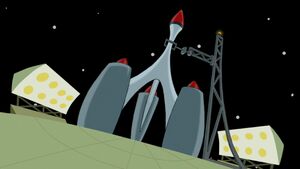 The Kepler is a rocket that features prototype boosters, potentially making it the fastest man-made object ever created. The original Kepler was stolen and modified by Motor Ed, which presumably prompted the creation of the second Kepler.

The Kepler is capable of traveling at hypersonic speeds. However, the resulting shockwaves can decimate large objects that it passes, ripping apart buildings and other vehicles with ease.

Motor Ed's modified Kepler
Add a photo to this gallery

Retrieved from "https://kimpossible.fandom.com/wiki/The_Kepler?oldid=34896"
Community content is available under CC-BY-SA unless otherwise noted.