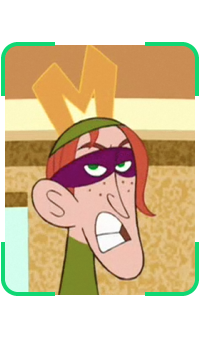 The Mathter is a math-obsessed supervillain and one of Team Go's eccentric foes.[1]

The Mathter heavily involved math in every aspect of his life. Even his speech was peppered with frequent, and after a few minutes of exposure, fairly easy to guess at, math puns. "Brackets!" for example, was his way of saying, "Curses!" This behavior happens to be very annoying towards Kim Possible, who even threatens to lose her temper on the Mathter if he dares to say one more math reference. However, as devoted to numbers as the Mather was, he was defeated by Mr. Stoppable, someone who worked with numbers everyday.[1]

The Mathter was a brilliant but obsessed mathematician. He somehow had the ability to entirely erase or "subtract" a person's existence, virtually rendering them invisible to every common means of tracking, such as global positioning, as well as school, employment, and driving records. He himself implied it was a job that he could complete with his Calcu-laser.[1] Because of these unethical experiments, the Go City Council Board denied him more funding, which has led him to become vengeful in nature.

The Mathter swore revenge when Go City denied him funding for his unspecified "unethical mathematical experiments" and has apparently been a threat to both the city and Team Go ever since.

He attacked Go City when Ron and Kim were there so that Ron could interview Hego for a school assignment. During the ensuing battle the Mathter took a disliking to Ron for his interference, and thus subsequently attempted to "subtract" Ron from existence by turning him into anti-matter. This started to put Ron's life in danger, since he unable to touch anything without making it disappear, and he was forced to be put into a anti-anti-matter bubble by Kim's father Dr. James Possible.

After getting track of the Calcu-laser that can reverse the effects, Kim, Hego, Ron, and Ron's father Mr. Stoppable arrive at the Mathter's lair and defeated the rest of his henchmen. However, the Mathter has created himself the Infinity Dome, which allows a person to utilize mathematical equations into beams of energy to attack his enemies, and he uses his mathematical knowledge to strike a beam at Kim and Hego, defeating them. However, Mr. Stoppable takes on the challenge himself, since he happens to be a good actuary, and uses his mathematical knowledge to defeat the Mathter, much to Ron's delight.

After Kim gets the Calcu-laser and return Ron back to normal, Hego takes the unconscious Mathter into custody for his crimes.[1]

The Mathter was accompanied by his similarly clothed henchmen, who he called the Coefficients. However, they appeared to lack any actual combat training and were always defeated fairly quickly.[1]

Having been based in Go City, the Mathter was one of several villains that Team Go had to deal with. Both Hego and the mayor considered the Mathter a threat not to be underestimated. The Mather is also one of the few villains who hate Ron more than Kim.

The Mathter wears a math based uniform.

The Mathter is voiced by Brian Stepanek.