The Mentor of Our Discontent 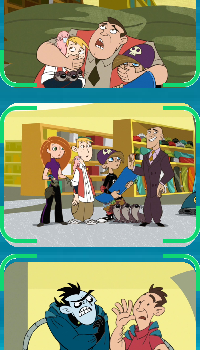 Ron is stuck with mentoring Artie, a rebellious teenage who happens to be the son of Ron's employer, Mr. Martin Smarty himself. Meanwhile, Frugal Lucre asks Drakken to mentor him in the art of evil.

Main article: The Mentor of Our Discontent/Transcript

After the adventure, Shego attempted to continue seeing Martin Smarty because he was rich until seeing that he had a son, Which caused her to walk away.

Martin Smarty gives Ron a new job at Smarty Mart -- be a role model for his rebellious son, Artie. Meanwhile, Drakken and Frugal Lucre team up to take over the world by taking control of Smarty Mart's new shelf-stocking robots, and now Ron, Kim, and Artie must stop them from wrecking Smarty-mart.