The Secret Files is the first Kim Possible episode DVD. It was released in September 2003. Prior to the release of Kim Possible: The Complete First Season in 2010, it was the only commercial release to include the pilot episode "Crush". 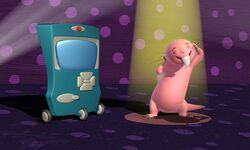 Three episodes are used to make up the "movie" on the DVD. The title sequence uses the full version of Call Me, Beep Me with new scenes accompanying the extended song. A 3D CGI version of Rufus competes with the A.I. inside the Kimmunicator to be the host of the movie. At the end, the two make peace while Rufus dances to the intro of The Naked Mole Rap with holograms of himself. An extended version of the song plays during the end credits.

"A cartoon character who's bright in every sense."
— Ken Tucker, Entertainment Weekly

From the hit TV series, it's Kim Possible, just your average teenager girl out to save the world. She foils sinister plots around the globe with her sidekick Ron Stoppable and still makes it home in time for dinner. It's big fun as Kim takes on some seriously wacko bad guys in this way cool series of adventure.

Here's the "sitch": Rufus, Ron's pet naked mole rat, goes 3-D and takes control of the "Kimmunicator" to guide you through three awesome Kim Possible missions, including a never-before-seen episode. This is the only place to catch all the thrills as the evil Dr. Drakken feigns love for the villainous DNAmy in order to take advantage of her mutation skills. It's cool. It's hot. It's SO not the drama! 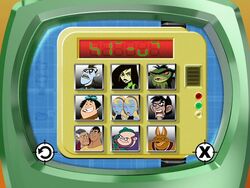 Retrieved from "https://kimpossible.fandom.com/wiki/The_Secret_Files?oldid=30568"
Community content is available under CC-BY-SA unless otherwise noted.