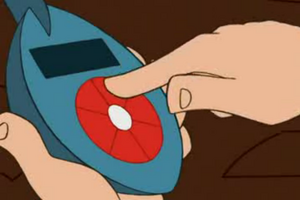 The Ultimate Remote Control, often shortened to URC, has the ability to control virtually any device.[1]

The Ultimate Remote Control essentially worked like any universal remote, in that it first had to be programmed with the data of the device to be controlled. Once this requirement was met, it could supposedly control any device.

For the most part, the URC seemed to work best in the hands of those especially familiar with computers: both Frugal Lucre and Shego were able to use it right away with no preparation.[1]

Retrieved from "https://kimpossible.fandom.com/wiki/The_Ultimate_Remote_Control?oldid=26631"
Community content is available under CC-BY-SA unless otherwise noted.