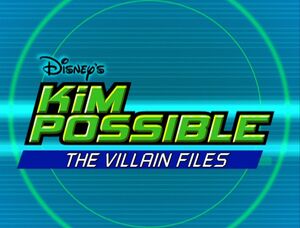 The Villain Files is the second Kim Possible episode DVD, following The Secret Files in September 2003. It was released in December 2004. It contains four episodes, presented back-to-back with a single title sequence preceding them and a combined credit sequence at the end. At the time of the DVD's release, "Showdown at the Crooked D" had not been broadcast. It would have originally been a Season 2 episode, given its production code.

The world's coolest teen crime fighter is at it again as she and her trusted sidekick Ron Stoppable keep the world safe from more seriously wacko bad guys in Kim Possible: The Villain Files. It's big-time fun as Kim Possible takes on Duff Killigan, Senor Senior, Junior and a host of other archenemies in this super series of adventures.

Experience four awesome Kim Possible missions, including a never-before-seen episode starring the dreaded Dr. Drakken as he unveils his plot to take over the planet. In other action, Kim tries to predict her perfect mate and finds herself in humiliation nation when she literally almost dies of embarrassment. It's way cool action you don't want to miss. 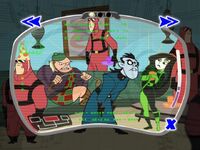 Retrieved from "https://kimpossible.fandom.com/wiki/The_Villain_Files?oldid=30569"
Community content is available under CC-BY-SA unless otherwise noted.