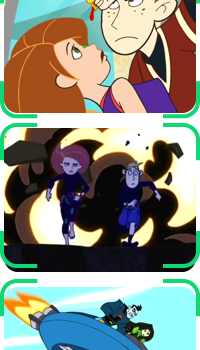 Kim's tardiness earns her detention, but a tiny robot creates an explosive situation.

While trying to print her term paper in time for class, Kim Possible lands herself in detention for being tardy for the third time in a month, courtesy of Mr. Barkin. For Kim, this is a huge deal due to her status as a cheerleader and how it might make her look, however, these worries are put on hold when Wade informs her of an incident in the Amazon.

When they arrive Wade reveals some security camera footage that reveals an unknown thief. A bug researcher named Professor Acari has had his experimental robotic tick stolen by this thief for an unknown purpose. It is later revealed that the thief is named Shego, a criminal wanted in eleven countries who is working under the employment of Dr. Drakken.

Back in Middleton, Kim serves her first block of detention in Room 12 with a trio of other teens not of the same caliber as her on the school hierarchy - Junior, Vinnie and Big Mike. Thankfully, her suffering is cut short by a plan hatched out by Ron and Rufus. Rufus poses as a rampaging mutant that has broken free from the science labs. Freaking Mr. Barkin out and resulting in the students evacuating the room.

Free from her detention, Kim and Ron meet at Bueno Nacho. There, Wade gives them an update about a villain's lair in the Caribbean that links back to Shego, as well as informing Kim of a new gadget he has provided her with - an Elastic Constricting Agent disguised as lipstick. Which Ron promptly uses on himself before hearing Wade's full explanation.

Kim and Ron head to the Caribbean lair, but are immediately captured by, and introduced to, Dr. Drakken who plans to feed them to his man-eating sharks. He releases Kim and Ron into the shark-pool before heading off to work on his newest invention. Kim manages to restrain the sharks with her new lipstick. Her and Ron get out of the shark pool and sneak around the lair. Meanwhile, Drakken tells Shego how he plans to combine the robotic tick with his own nano-explosive as a weapon. Once attached to a victim, they would be at his mercy. While Drakken is revealing his plan to Shego Kim manages to retrieve the plans for the robotic tick. Based on his ranting to Shego Kim decides Drakken certainly belongs in the "mad scientist" category. Shego catches Kim and Ron sneaking around, and Drakken enables his remote controlled lasers in another attempt to dispose of Kim and Ron. Armed with her compact mirror Kim manages to deflect the laser beams - which results in Drakken's lair exploding. Her and Ron flee Drakken's lair safely.

Upon returning to Middleton High, Ron comments on how Kim seems to be connecting with the detention guys. Kim retorts otherwise and heads off to cheer-leading practice. On her way she receives a thanks on the Kimmunicator from Professor Acari for returning his plans. Kim is keen to get back to cheer-leading practice, but Mr. Barkin puts Kim back into detention after identifying the 'mutant' as a naked mole rat. Embarrassing her in front of the whole squad.

Meanwhile back in the Caribbean, Drakken and Shego discover that the missing tick is at a high school - with Kim Possible.

In detention, the other teens notice a "zit" on Kim's nose that turns out to be Drakken's explosive nano-tick. Immediately Kim ditches detention to find Ron and try to get the tick removed before it explodes. Barkin is less than pleased by her defiance.

Ron meets Kim at the school's entrance on his scooter. Unfortunately for them Drakken as well as Mr. Barkin - with the other detention teens in tow - engage in hot pursuit. Drakken tries to grab Kim from the scooter using his gravatomic ray to lift her into his hovercraft. Ron zig-zags out of the ray's path, but Barkin, so focused on catching Kim takes no notice of it and ends up in its path. Kim manages to save them from the ray by deflecting it using the car's number plate, after she accidentally pulls it off in an attempt to pull down the car.

Her and Ron seek refuge in Bueno Nacho, but Drakken and Shego arrive and Shego uses his gravatomic ray to lift the roof off. Shego immediately enters and confronts Kim, demanding that she give the nano-tick back. Unable to do so, as it is stuck to her face, Drakken tells Shego to take off Kim's nose if she has to. Combat ensues between the two of them. While they fight Ron contacts Wade to find out how to get rid of the tick. Kim manages to throw Shego out of Beuno Nacho - and into Mr. Barkin - as him and the other detention students arrive. In a moment of frustration at Shego's apparent failure, Drakken accidentally activates the nano-ticks detonation sequence. It begins beeping in count-down of an impending explosion. Wade explains to Kim and Ron that the tick is too small to disarm, and thus the only way to remove the tick would be to burn the circuits. In a moment of quick-thinking, Ron decides that Beuno Nacho's infamous Diablo Sauce, "the most dangerous chemical known to modern man", should do the trick. Ned tosses him a sachet of it. He opens it, leans towards Kim, preparing to use it on the tick - but they are immediately interrupted by Shego. Big Mike intervenes and incapacitates Shego by sitting on her. Kim shares a brief and awkward exchange with Big Mike before Ron returns to the process of using the hot sauce on the tick in an attempt to fry it's circuits. Ron successfully loosens the tick from Kim's face, sucking it up into a straw. He then panics, uncertain what to do as the tick gets ever closer to exploding. Kim grabs the straw from him and uses it to shoot the tick up into Drakken's hovercraft. In the nick of time Drakken jumps out of the hovercraft and grabs onto Beuno Nacho's taco sign as his vehicle explodes and as law enforcement arrives.

Even though Drakken is thwarted, Kim still has to serve her detention time. But this time she's made friends with the very people she previously deemed not cool, countering Barkin's objective of making detention a period of quiet suffering. Ron and Barkin look on as Kim gives manicures to her detention companions.

In her usual casual outfit.

In her mission outfit.

In scuba gear while searching for Drakken's lair.

Cheerleading outfit and safety helmet.
Add a photo to this gallery

In his usual casual outfit.

In his usual mission outfit.

The outfit he wore during his worst summer at Camp Wannaweep.

Ron's scuba suit without the mask and breathing apparatus.

In casual outfit with safety helmet for scooter.
Add a photo to this gallery

To See more images from this episode, see Gallery

Retrieved from "https://kimpossible.fandom.com/wiki/Tick-Tick-Tick?oldid=36524"
Community content is available under CC-BY-SA unless otherwise noted.