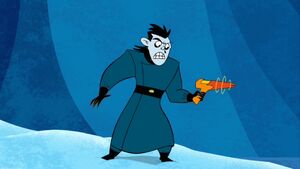 The Truth ray made anyone shot by it unable to lie until the effects wore off. It was likely either invented or stolen by Dr. Drakken.[1]

The Truth ray effectively shut down all of the brain inhibitors in a target, which made them unable to lie, and also caused them to blurt out the truth. According to Wade, the ray's influence lasted about a day.[1]

Dr. Drakken was planning on using the Truth ray on Dr. Wanda Wong, who he and Shego had kidnapped, but she was rescued by Team Possible before this could happen. During the battle, Drakken slipped on some ice, accidentally shooting both Kim Possible and Ron Stoppable with the ray.

Unaware of the ray's influence on her, Kim sat for an interview with Spirit Squad Weekly, a cheerleading magazine. In the process, she unintentionally revealed:

As a result, after Kim ran off mortified, the interviewer decided to choose another cheerleader to be featured in the magazine instead.

Kim attempted to practice some lies, but was only able to tell the truth. She then checked in with Wade, who scanned her with the Kimmunicator and confirmed that her brain inhibitors were shut down as a result of Drakken's ray, so she could only blurt out the truth. Kim realized that Ron had been hit as well, and might be in similar trouble.

Ron, however, had become quite popular with his truth-telling.

Kim's truth-telling also managed to ruin a dinner that her father had invited the board of directors from his job to, because she was unable to warn her parents in time. Kim flat out told the three directors that they were boring, a know-it-all, and had a bad hairpiece. Fortunately, the final director and board chairman, Dr. Wong, arrived later. She thanked Kim for saving her, and confirmed the existence of the truth way, which the other directors had doubted.

The ray's influence had worn off by the next day, returning Kim and Ron to their normal selves.[1]

Dr. Drakken firing the Truth ray
Add a photo to this gallery

Retrieved from "https://kimpossible.fandom.com/wiki/Truth_ray?oldid=34820"
Community content is available under CC-BY-SA unless otherwise noted.