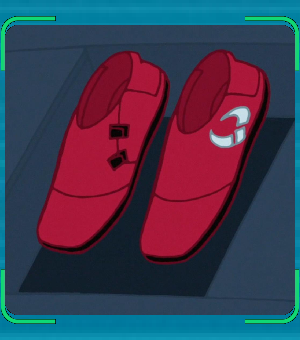 The Valkyrie 1000 is an experimental running shoe designed to hyper-accelerate the kinetic movements of living organisms.[1]

The Valkyrie 1000 greatly increased the speed of the wearer. The human-size pair eventually allowed the subject to move at hyperspeed, easily faster than the human eye could follow. However, testing on the shoes was not yet complete, and so prolonged use resulted in the subject becoming "stuck" in hyperspeed, unable to return to normal speed when desired or to remove the shoes when stuck to their feet.[1]

A drawback eventually revealed about the pairs given to Kim and Rufus was that after being used for an extended made them nearly impossible to take off or control with precision. In trying to get to the school dance, Kim and Rufus were unable to stop in time, overshooting the gymnasium and ending up near both the Statue of Liberty in either New Jersey or New York and Golden Gate Bridge in California.

Wade was able to procure the only human-sized pair of Valkyrie 1000 prototypes in order to stop the Bebe robots, also able to move at hyperspeed. However, Kim's using the shoes that gives her super-speed powers on other activities as well increased her speed to the point where it was extremely difficult for her to return to normal speed at will. The same was true of Rufus, who also borrowed a pair from the mouse, and while he did not use them as much as Kim, presumably wore his even longer than she did.[1]

Kim in her new shoes

The super shoes are stuck to Kim's feet

Kim running in her super shoes.
Add a photo to this gallery

Retrieved from "https://kimpossible.fandom.com/wiki/Valkyrie_1000?oldid=35813"
Community content is available under CC-BY-SA unless otherwise noted.