View source
This article is about Wade, the original continuity character. You may be looking for his movie continuity counterpart. 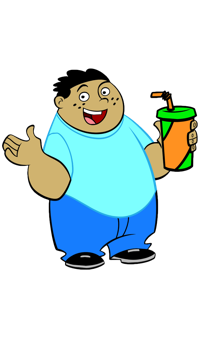 Wade is Kim and Ron's Communication Guru. He is ten years old during Kim's Sophomore year, yet had not only already graduated high school, but had completed college within eight months. He created the Kimmunicator and other gadgets which has provided Kim with the tools needed to fight her foes. Though Wade is on the large side, his brain is even bigger. He rarely leaves the house and has only been seen in person twice prior to Kim's Senior year. After coming out of his room to help against Team Impossible, Wade occasionally acts Kim's sidekick on missions alongside or instead of Ron.

Wade is short and overweight. He has a light hazel-colored skin, brown eyes, frizzy black hair, and dark brown freckles on his cheeks.

Wade is almost always wearing a blue t-shirt and jeans.

Wade was inquisitive and curious. Though he was highly intelligent and confident because of it, Wade did not typically brag about this. He was, however, fairly competitive with those he considered his intellectual rivals.[1]

One of Wade's more defining traits was that he almost never left his bedroom, where his computer system was set up. Despite this, his extensive computer network and hacking skills allowed him to access virtually any location or person via technology, which he seemed to prefer to actual physical contact. Some fans have attributed Wade's apparent refusal to leave his bedroom as a form of agoraphobia, but this was never confirmed.

At times, Wade displayed a certain lack of ethics in his work. He typically needed very little prodding to hack into government or top-secret sources, viewing them more as fun challenges than anything else. Likewise, Wade did not seem very guilty over having secretly microchipped Ron at some point[2], or that he invented a love ray in order to force Monique to like him better.[3] However, it should be noted that in most cases, Wade did things of a questionable nature only at Kim's request.[4]

In Virtu-Ron, you did see a Cyber-Wade, in the game Everlot, after someone had managed to put an immersion cap on Ron's head, and the only way to be able to rescue Ron was to win the game. Ron was a "noob" at this game, but Wade was not. His cyber-self was a wizard. His cyber-self appeared in the game, but he did stay in his room in this episode.

In Sitch In Time: Future, Wade, 20 years in the future, you finally saw in person, and he was a giant. "I hit a growth spurt," he claimed. He was in charge of the rebellion against "The Supreme One." He is finally seen in person.

For the first two seasons, and most of the third season, Wade is never seen outside of his room, until the episode "Team Impossible," after Team Impossible overloaded his computer system with a power spike, he personally arrived on scene, and vented on the three members of the team.

In the fourth season, Wade ventured out of his room to give Kim new inventions and, on at least one occasion, to return Kim's battle suit to her after repairs and upgrades were made to it. A running gag throughout the series is that Wade has secretly placed a tracking microchip on Ron, although he tries to avoid answering when questioned about this. Wade has also shown more of a willingness to take an active role in missions, replacing Ron as Kim's sidekick in a mission to stop Dr. Drakken's cupcake plot and driving Franklin Barkin's boat while Kim, Franklin, Ron, Monique and a reluctant Bonnie battled the possessed Drakken.

Wade is a ten-year-old genius in the beginning, who runs Kim Possible's website, supplies her with her various gadgets, gives Kim her missions through her "Kimmunicator", and arranges transportation for her. He has even gone on missions with Kim on rare occasions. He often relays information to her, searches information for her, and performs programming feats.

Despite being a genius, Wade was only ever seen in person for the first time during the group's confrontation with Team Impossible, which made him angry at the team for sending a retaliatory virus-like computer attack known as a "spike" which had fried his system. After that incident he proceeded to maintain a more regular personal contact with Kim and Ron.

Wade's hacking talents are regularly put to good use, as firewall defenses like Drakken's can only keep him from getting into the deepest things ("Crush"), and he's able to tap into Global Justice Spy Satellites when need be ("A Sitch in Time"), and was even able to "hack into the unknown" to find out about Yamanouchi. Few things have been recorded to be able to withstand his hacking, the lab in which the Centurion Project was developed being one of them ("October 31st").

Wade is also an inventor, sometimes bordering on becoming a mad scientist himself. Among his more mundane devices includes Kim's iconic grappling hook, laser lipstick, and a compact mirror capable of deflecting energy weapons. On the higher end of the spectrum, Kim's battle suit ("So the Drama" ) and a love ray ("The Cupid Effect"). Regardless of what scale, Wade's inventions are reliable and only break when damaged or improperly used by the user.

Wade is a very talented child, as he interlinked with the whole world in his very own room at home and created several small gadgets for Kim and Ron. He likes technology and prefers to solve things the technical way. As already established, his hacking has few obstacles that he can't beat and anything to do with technology is something Wade can generally get into and deal with.

However, in the field he has been shown to be less than useful as he had at least one friendly fire incident with a stun device ("Odds Man In") which resulted in him and Kim being captured. Nonetheless, he can ride horses ("Cap'n Drakken") and his gadgetry talents are useful in a support role on the team when in the field ("Homecoming Upset").

Wade's mother, whose name we never learned appears to be African-American. Only she has rarely appeared on the show, although his father, Lontaine, has been clearly mentioned as being around. They both seem unconcerned with their son's way of spending all his time, and his mother seems to really enjoy Wade's inventions and cleverness, except for his occasional attempts to hack her digital cookbook to remove items such as broccoli.

Wade might also have a great grand-uncle who and was a photographer 100 years ago, although that may have been just in a dream shared by Kim and Ron.

Wade's parents may have realized that their son spending all his time in his room was not actually healthy for him. They took the family away to a secluded island, "where NO TECHNOLOGY is allowed for a vacation". As Wade put it, "They think I'm too wired". Unfortunately, for Kim and Ron this happened when they needed rides to and from Greece because they forgot Rufus after a mission to capture Camille Leon.[8]

Beyond being their co-worker, Wade was a devoted friend to Kim and Ron. He was always willing to help with non-mission related troubles: more than once he offered to tutor them, volunteered to hire a personal trainer when Ron became considerably overweight, and at times still agreed to help Kim while she was doing something he considered to be less than honorable. Wade was also on good terms with Kim's family, and needed little prompting to assist them when they became involved in Kim's missions. In particular, he seemed to get along best with Jim and Tim, who he saw as his intellectual peers.

Kim considered Wade a close friend as well, and while under the influence of a truth ray, admitted that she was concerned about his always staying in his room. Ron was always eager to hang out with Wade outside of missions, and was regularly disappointed when Wade was unable to meet him in person. Despite being less than an expert on love himself, Ron went to great lengths to help Wade with his own love issues.

Possibly due to his age, Wade was somewhat disgusted by the sight of Kim and Ron kissing, but did not object to their becoming a couple.

Wade felt attracted by Monique after encountering her face-to-face, but after the events went astray, they remained friends and he found someone with a compatible intellect named Olivia.

Eugene was one of Wade's computer buddies. He seemed very much like Wade in that they communicated largely by computer: both dressed in costumes and participated in virtual trick-or-treating on Halloween.[9]

Once during her senior year, Wade finally met Monique for the first time in person, where he was struck suddenly with her beauty. So much so he took Ron's advice in the wrong fashion and created a love ray to force her to like him in return.

Immediately following Wade's crush on Monique, he quickly recovered from his minor heartbreak upon seeing a girl named Olivia sitting in Bueno Nacho. However that crush soon wore thin as she too was a genius and had created a love ray herself, much to his chagrin. Which really was unclear why she did as they both obviously liked each other at first sight.

Although it is not seen, from the statement Wade made to Ron about Olivia having been using the ray on him, it could be implied she may have used it on him the day they had met as well.

His enemies include all villains Kim ever faces, though he is never actively involved into the fights except with Team Impossible, and even then all he did was activate their own McHenry Laser Grid on them.

He has helped Kim, when he acted as her sidekick, because Ron was staying in his panic room. They were captured by Dr. Drakken, when he accidentally stunned Kim. This required Ron to leave the panic room to help rescue them and to help stop Dr. Drakken from creating another ice age.

He also became personally involved in the Cupid Effect, when the Seniors wanted to use his own cupid ray to make all females fall in love with Junior. He also accompanied Kim and Ron in Homecoming Upset, esp. when Ron was stuck with Homecoming King duties, as well as trying to find Bonnie "a new hottie," with no success. Junior was again the reason for this.

One of Wade's running gags is that each time he says he will finally meet Kim and Ron in person, something happens to prevent him from showing up. Ron always gets very excited about the idea of actually meeting Wade, but Kim is more realistic and almost expects Wade not to be there each time.[10] Instead, Wade usually sends some representation of himself to assist. This is usually in the form of one of his remote-operated Wade-bots[6][7], but has also included a holographic Holo-Wade.[11] Wade also made an appearance as his Everlot character, a wizard.[12]

In the future timeline created when Shego stole the Tempus Simia idol and took over the world, Wade was the leader of the Shegoton resistance force. Virtually every hero who fought against Shego experienced considerable increases in height and muscle mass, and Wade in particular was taller and more muscular than anyone else. He attributed his height to a growth spurt, but as with everyone else who was asked, claimed the muscles were a result of the ongoing battle against an evil dictator.[13]

From "Attack of the Killer Bebes"

From "The Cupid Effect"

Wade is voiced by Tahj Mowry in all four seasons, who is famous for playing T.J. Henderson from the Disney Channel TV show Smart Guy.