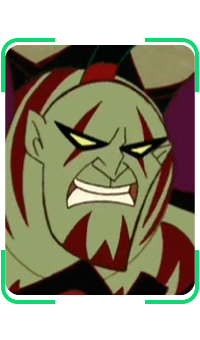 Compared to humans, Warhok was a giant, towering somewhere between eight and ten feet tall. Like Warmonga, Warhok's skin is green.

However it is abundantly adorned with red markings which could be either warpaint or tattoos. While possible the markings could be natural to his skin, it is unlikely as Warmonga does not display any such; which is not to say it cannot as often in nature Males and Females of a species can be different. Simply not enough is known about Lorwardians to be able to say if the pair are typical representative samples of the Race.

Warhok's cruelty knows no limits. After the failed invasion, out of pure anger he intended to kill Kim and have her stuffed and mounted. He is more ruthless than any villain Kim and Ron have faced, being one of the few to attempt to kill both Kim and Ron and the closest to taking over the Earth. Warhok could very well be the most Dangerous Enemy that Kim and Ron have ever faced.

It is unknown if he is as devoted as Warmonga to finding the Great Blue.

Warhok and Warmonga attacked Earth during Kim Possible's high school graduation as revenge for Drakken deceiving, and Kim defeating, Warmonga. Warhok abducted Drakken and Kim, and launched an invasion of powerful war machines to take over the world. Ron, Rufus, and Shego managed to rescue Kim and Drakken, then disabled the power core of Warhok's ship, causing it to fall out of orbit and into Earth's atmosphere. After he abandoned the ship, Warhok battled with Drakken, Shego, and Team Possible. Warhok defeated them, and announced he would take Kim back to his homeworld as a trophy. The thought of losing Kim proved to be the catalyst that Ron needed to tap into his dormant Mystical Monkey Power. Ron proceeded to single-handedly defeat both Warhok and Warmonga in combat. Warhok was last seen being thrown by Ron into his spaceship, which then exploded, presumably killing them.

"Come Warmonga, we will take her as a trophy, she will look handsome beside your Thorgogle spine."

He is voiced by actor Ron Perlman, who is famous and best known for playing the comic book character Hellboy in the two Hellboy movies, and voices other evil, fictional characters in other various animated shows such as Slade in Teen Titans.