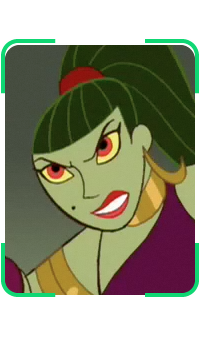 Warmonga is a female alien from the planet Lorwardia. As seems to be the case for the rest of her people, Warmonga is a skilled warrior and delights in using her incredible strength in heated battle.

Compared to humans, Warmonga was a giant, towering somewhere between eight and ten feet tall. Her green skin, while apparently normal on Lorwardia, made her a minority on Earth. According to Wade, there were only two other such women: Shego and the spokeswoman for the Asparagus Advisory Counsel[1].

Lorwardian culture seems to be based primarily around hunting and conquest, and Warmonga is a prime example of this.

Warmonga is extremely strong, a fierce fighter, and is very eager-to-please, though she can be very literal-minded when following orders.

She exhibits an incredible obsession with finding the Great Blue and pledging her loyalty to him, and that she is somewhat gullible.

Still, communication with Warmonga has proven to be taxing at times. Despite her minor traits of always referring to herself in the third person, as well as yelling out her name as a war cry. It is unclear whether this is simply her behavior or is typical of her entire race or at least warrior caste, Warmonga has absolutely no concept of Earth slang phrases. When Drakken tries to explain to her the concept of "showing someone the door", she actually picks Shego up and tossed her through the door. This leads to another problem. Being every bit as powerful as her enormous size indicates, Warmonga has little understanding of her own strength in comparison to regular humans. This makes her dangerous even when she's trying to be nice. More than once, she finds herself hugging Drakken and nearly crushed him [1].

When seeking vengeance against Drakken and Kim during Kim's graduation, she appears to be as malicious as Warhok. When Warhok tells her they're going to take Kim back to their planet and mount her on Warmonga's wall as her own trophy, she just smiles while looking at an unconscious Kim being held upside down by the leg [2].

Warmonga is an extremely strong and capable fighter. She has stated that she can lift 1300 "Kwalocks". Even without her vast array of Lorwardian weapons and technology, a few blows with her brute strength is enough to greatly stun or disable most combatants. However, as she does combine her natural power with weapons in battle, this makes her all the more difficult to stand against even momentarily. In addition, Warmonga is highly resistant to injury, and most battle damage suffered only served to annoy her at best.[1] The only one shown to be capable of truly matching Warmonga is Ron Stoppable with the Mystical Monkey Power.[2]

Before she travels to Earth, Warmonga is apparently a warrior of considerable fame among her people. She was victorious in a battle of the thirteen moons of the planet Jingos. She and her comrade Warhok typically hunted side by side, and he gave her the spine of a creature called a Thorgoggle from their first hunt on the moon of the planet Parfa. Warmonga is implied to collect such trophies from her successful hunts [2].

Warmonga journeys to Earth in search of the "The Great Blue": a legendary figure from her planet's mythology whom, it is prophesied, will lead her people to conquer the universe; a leader to whom she would pledge her allegiance and her arsenal of advanced weaponry. Because the prophecy also states that "The Great Blue" would make contact from beyond the stars, when Warmonga picked up a broadcast of Dr. Drakken's earlier performance on American Starmaker, she becomes convinced that her search is finally over. She breaks Drakken out of prison, eager to begin their partnership. Though Drakken is fully aware of Warmonga's mistake, he is glad to be free of prison, and happier still to have a willing, superior sidekick with a wide array of advanced Lorwardian technology. Warmonga quickly proves her worth by defeating and capturing Shego, and then proving a considerable threat even against Kim Possible in her battlesuit. Warmonga is so powerful, in fact, that she was not actually defeated: Shego leaks Warmonga's fanatical devotion to "The Great Blue" to Wade, and one of Kim's brothers used their "Pep Puppies" costume to convince Warmonga that Drakken has lied about his identity. Enraged, Warmonga turns on Drakken and promptly leaves Earth to meet "The Great Blue" elsewhere[1].

Warmonga returns to Earth later on for revenge, this time accompanied by Warhok and his Lorwardian invasion force. Though their primary goal is total planetary domination, they also seek to avenge Warmonga's damaged pride, so they abduct and imprison both Drakken and Kim aboard Warhok's spaceship shortly before the invasion begins in earnest. Ironically, this is what drove Ron Stoppable and Shego to form an unlikely partnership in order to free their respective partners. Though Warmonga and Warhok's superior strength and technology make for a constantly uphill battle for the Earthlings, the Lorwardian duo are finally defeated when Ron taps into his dormant Mystical Monkey Power; throwing them headlong into their crashing spacecraft just before it explodes. Her ultimate fate is never confirmed: some fans suggest that she was apparently killed, though this is debatable, considering the overall nature of the series and the Lorwardians' tremendous resistance to injury [2].

Based on the belief that Drakken is the Great Blue, Warmonga pledges herself fully to him. She is happy to be named his new sidekick, and gives him the use of all of her Lorwardian technology. She is also rather affectionate physically, which Drakken dislikes both in general, and because her great strength typically results in her hurting him. [1]

Once Warmonga is tricked into believing that Drakken lied to her, she becomes vengeful and abandons him, and is all too happy to invade his home planet and imprison him as a consequence.

The exact nature of Warmonga's relationship with Warhok is unclear, especially given her initial treatment of Drakken. If nothing else, Warmonga certainly considers Warhok a trusted comrade, and their bond appears to be quite strong, as Warhok is very interested in avenging those that have wronged Warmonga, and is in the habit of giving her trophies to commemorate their victories[2].

She was voiced by Kerri Kenney.