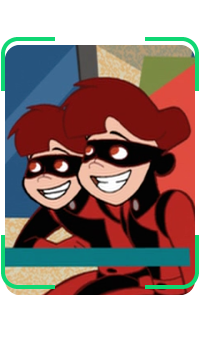 The twin brothers known as Wego are the youngest members of Team Go. They are never referred to as individuals, only as Wego or "the twins". Despite their youth, they appear to be the most well-adjusted members of the team.

Considering they were once led into a trap under the pretense of a "teen twin mixer" by Electronique, it was possible their ages were in the range of thirteen(13) to eighteen(18) as of that episode.[1]

The twins had a very positive and friendly attitude, though were not as naive as Hego. While they appeared to treat all of their siblings equally, they did seem spend more time with Mego in general, although they clearly grew weary of his self-centered nature at times. They also had a habit of finishing each other's sentences.[2]

Although the twins were never specifically stated to have enhanced strength, through the use of duplicates they could easily accomplish feats that the two originals could not alone, such as lifting and carrying a steel girder. They appeared to have very little combat training, as their fighting style consisted mostly of surrounding and dog-piling opponents with sheer numbers. To their credit, however, this enabled them to briefly pin even such experienced combatants as Kim Possible.[1]

Wego are voiced by Fred Savage.

Retrieved from "https://kimpossible.fandom.com/wiki/Wego?oldid=36270"
Community content is available under CC-BY-SA unless otherwise noted.