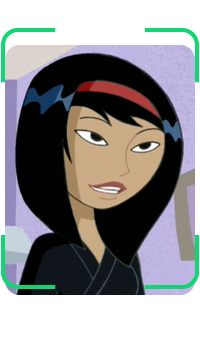 Yori is a student at the Yamanouchi Ninja School in Japan, as well as an ally to Kim Possible and especially Ron Stoppable.

Yori is a slender and athletic Japanese girl with shoulder-length shiny black hair, black, narrow and slightly slanted black eyes and she always wears a red headband in her hair.

Yori is very respectful towards everyone she meets, the only exception being established villains. Even among people she knows well, she never fails to bow as a sign of respect. She is quite concerned with honor and as such attempts to behave honorably at all times, and encourages others to do the same. This is also how she frequently challenges Ron Stoppable to take the lead role when they are together, which Ron tends to respond to, both as a way of proving himself a hero and hopefully impressing Yori as a bonus. Admittedly, most of things that Yori states are Ron's honor to do may also be considered either grunt work, or something a gentleman would be expected to do in a lady's presence (which Ron seemed largely unaware of). Some examples of this included:

Yori also finds Ron very amusing with what she refers to as his "American style jokes" and "American style buffoonary", although in most cases Ron is just uninformed or accident-prone, and not actually trying to amuse her.[1]

Yori appeared to be a fairly talented ninja as she could usually hold her own in battle unless considerably outnumbered.[1] On the few occasions when they fought, Yori's battles with Kim Possible suggested that they were very evenly matched in skill.[2] In addition, Master Sensei seemed to place a great deal of faith in Yori, which suggested that she was likely either one of his top students, or the most trustworthy.[3]

Master Sensei of the Yamanouchi Ninja School arranged for Ron Stoppable to come to Japan through a student exchange program, and Yori was the student chosen to be Ron's guide. Yori and Ron became fast friends, and though he was discouraged by his repeated failures at ninja training, she believed in him. With the help of rogue student Fukushima, Monkey Fist stole the magical Lotus Blade from the school. Yori went alone to retrieve it and was captured. Ron rescued her and returned the Lotus Blade to the school, but was sworn to secrecy about all that had happened in Japan.[1]

Yori later asked Ron for help in finding Master Sensei when he was kidnapped. They tracked down Monkey Fist, believing he was responsible, unaware that Kim and Wade were tracking them because of Kim's suspicions about Yori, who was an unknown to her. Yori gave Ron permission to tell Kim the truth about his time in Japan, and Kim joined forces with them. Their search turned out to be a trap: DNAmy had framed Monkey Fist, knowing that Team Possible would lead her to him. As Yori prepared to return to Japan, she kissed Ron on the cheek and said that she had liked him as more than a friend.[2]

Yori once again called on Team Possible when Monkey Fist broke into the school and stole a scroll, which contained a prophecy of a powerful mystic weapon. Their alliance was made somewhat awkward by the fact that Ron and Kim were then dating, and they expected Yori to be bothered by this, though she was not. Together they pursued Monkey Fist as he visited a series of temples to gradually unlock more details about the weapon. Once Monkey Fist was defeated, Yori returned the scroll to Yamanouchi, and entrusted the temple keys to Ron.[4]

Team Possible returned to Yamanouchi after they learned that Master Sensei had secretly arranged the adoption of Hana Stoppable, Ron's young and curiously skilled sister. However, the school had been evacuated, save for Master Sensei himself and Yori, due to an imminent an attack from Monkey Fist and Yono. In the battle that followed, the school was destroyed, but Monkey Fist was eventually defeated and imprisoned in stone.[3]

Yori viewed Master Sensei as a father figure, and obviously cared for and respected him deeply. She was greatly worried for his safety when he was abducted by DNAmy, and upon being reunited with him, rushed to embrace him, before recalling her manners and greeting him with a bow.[2]

Yori was the first person that Ron Stoppable met during his trip to Japan, and served as his guide. They became fast friends, and though Ron was unaware, Yori developed a crush on him.[1] Ron came to see Yori as his "favorite ninja," while Yori came to see Ron as a trusted friend and Yamanouchi's champion. As a result, she would call upon him each time the school was in trouble. Ron did not realize Yori's true feelings until Kim confirmed them[2], and the next time they saw each other, Ron and Kim were dating, which Yori did not seem at all bothered by.[4]

Yori's relationship with Kim Possible got off to a rocky start: Kim first met Yori when she abruptly appeared at Middleton High School, and Ron, sworn to secrecy about his time in Japan, came up with a very flimsy lie to explain Yori's presence. Though Yori greeted Kim as a respected comrade, Kim was instantly suspicious of her, aided largely by her own jealousy over the fact that Ron had an attractive female friend that he failed to tell Kim about. Once Ron was allowed to share the secrets of Yamanouchi with Kim, she gradually began to return the respect that Yori had for her from the start.[2] After Kim and Ron began dating, she urged Ron to inform Yori of this. Much to Kim and Ron's surprise, Yori was fine with Kim and Ron dating and truly didn't seem hurt by the announcement.[4]

Yori referred to Hana Stoppable affectionately as "little Han", and stated that Hana was like a little sister to her. Curiously, they do share similar skin tone and hair color, and Hana's exact biological origin is unknown.[3] It's possible that Yori is a biological relative of Hana's or was at least Hana's primary caregiver before she was adopted by the Stoppable-family.

Yori shows an interest in Ron's humorous personality as well as his benevolent behavior. She expresses her affection towards him by kissing him on the cheek on three occasions[1][2]. However as she knows they are not fated to be together, she sticks to being his friend.

Yori was most often seen wearing "combat clothing" of black shinobi shōzoku, considered the "traditional ninja uniform"; sometimes with hooded mask but generally without. While at the ninja school, especially during practice, she wore a white keikogi, or "practice uniform". On the occasions when Yori needed to appear out in the open as a normal student, she wore a light blue top with plaid skirt in the style of a traditional Japanese serafuku ("sailor" school uniform).[1]

However, the one thing which Yori always wore was a scarlet red headband.

Yori was voiced by Keiko Agena.