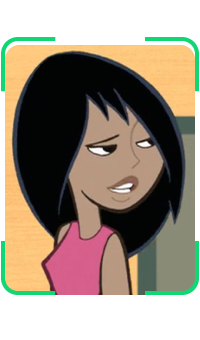 Zita Flores was a student at Middleton High School who worked at the local multiplex theater. Ron first met her at the ticket booth.

Early on, Zita seemed friendly but somewhat reserved when Ron repeatedly approached her, though this could be explained by her being on the job at the time.[1] Once she began to appear outside of her job, she was far more outgoing and confident.[2]

Zita was a highly experienced player of the online computer game Everlot. Though she was only well-known among a small group of friends at the time, since she spearheaded a successful revolt against the infamous Wraithmaster and was vital to his defeat[2], it is fairly safe to assume that her status in the game was considerably elevated afterward.

Zita began working as a ticket vendor at a movie theater in Middleton, replacing her notoriously sweaty-handed co-worker Lamar. Upon first meeting her, Ron Stoppable was tongue-tied. Though interested in her, he feared rejection because of the unwritten social rules, which stated, in his mind, that he could never be with a girl like Zita. Unfortunately, the movie ticket line was repeatedly proven a bad place to flirt with the ticket vendor, as Ron was regularly shoved aside by impatient people behind him. Still, he managed to make slight progress with Zita on each trip:

Some time later, Ron and Zita had officially become an item, and he wanted to take their relationship to "the next level," though he never actually stated what that meant. Zita and her friends were upset because Everlot, the online computer game that they enjoyed, had been taken over by a mysterious, malevolent character known as the Wraithmaster. Malcolm Nevious, another Everlot player, was attracted to Zita and wanted to impress her.

Ron accidentally gave Zita the impression that he was an experienced player as well, so she invited him to play with her. Thanks to a crash course with Wade, Ron met up with Zita in Everlot and defeated the Wraithmaster. Unfortunately for him, Zita still preferred meeting him in Everlot to meeting him in real life, since his idea of a date was yet another dinner at Bueno Nacho. Zita later received an invite to an Everlot event downtown, and Ron tagged along. It was trap: they were forcefully inserted into the game by the Wraithmaster, who demanded that Zita become his queen and proceeded to imprison many other players.

Zita said that she would never be impressed by something in a game because she wasn't that shallow, and attacked him to free the other players. During the fight, Ron realized that Malcolm was actually the Wraithmaster. Because of the immersion caps he had forced onto Ron and Zita, they could not leave the game until after they won. Joining forces with Kim Possible and Wade, the group launched an assault on Malcolm's lair, but were defeated.

Ron admitted to Zita that he had cheated to get as far in the game as he did. A legendary player known as the Tunnel Lord, clearly Rufus, challenged Malcolm. This allowed Kim and Ron to free the other players, who then transferred their powers to Zita so that she was strong enough to defeat Malcolm. Though Ron had lied to her, Zita still accepted an invite from Kim to join them at Bueno Nacho later, and did not appear to be upset with him.[2]

Zita had the distinction of having been Ron Stoppable's first serious girlfriend. This took quite a bit of effort on Ron's part, partially because he had been laboring under the impression that Zita would never even look at a guy like him. They did share a common love of movies[1] and video games, though Ron preferred shooters and Zita liked role-playing games. After they became a couple, Zita seemed somewhat frustrated by Ron's habit considering trips to Bueno Nacho as acceptable dates.[2]

Zita later began dating Felix Renton. While it wasn't revealed how they met, Felix also had a common interest in video games.

Retrieved from "https://kimpossible.fandom.com/wiki/Zita_Flores?oldid=31401"
Community content is available under CC-BY-SA unless otherwise noted.