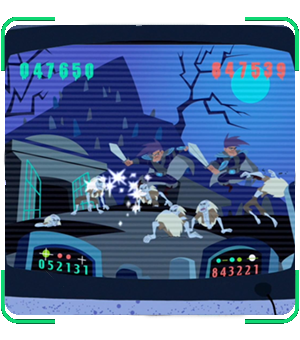 Zombie Mayhem is a video-game played by Ron Stoppable and Felix Renton.

Zombie Mayhem is a supernatural action console video-game in which the player has to defeat hordes of zombies in order to level up. Scores are given depending on how many zombies the player slays[1]. The game has both a single-player and competitive multi-player mode and allows the player character to be either a male or female avatar[2][1].

As of Kim and Ron's sophomore year there are three iterations of the game released thus far. While Ron argues that the second installment is superior, Felix prefers the third - part of his justification being that Zombie Mayhem 2 doesn't include flamethrowers[2].

Ron, Felix, and eventually an initially jealous Kim, attend an event called 'Zomba-Palooza' in which the game is to be played for twenty-four hours in order to provide research on repetitive stress injuries. Unfortunately the event is interrupted by Motor Ed [1].

Retrieved from "https://kimpossible.fandom.com/wiki/Zombie_Mayhem?oldid=29664"
Community content is available under CC-BY-SA unless otherwise noted.